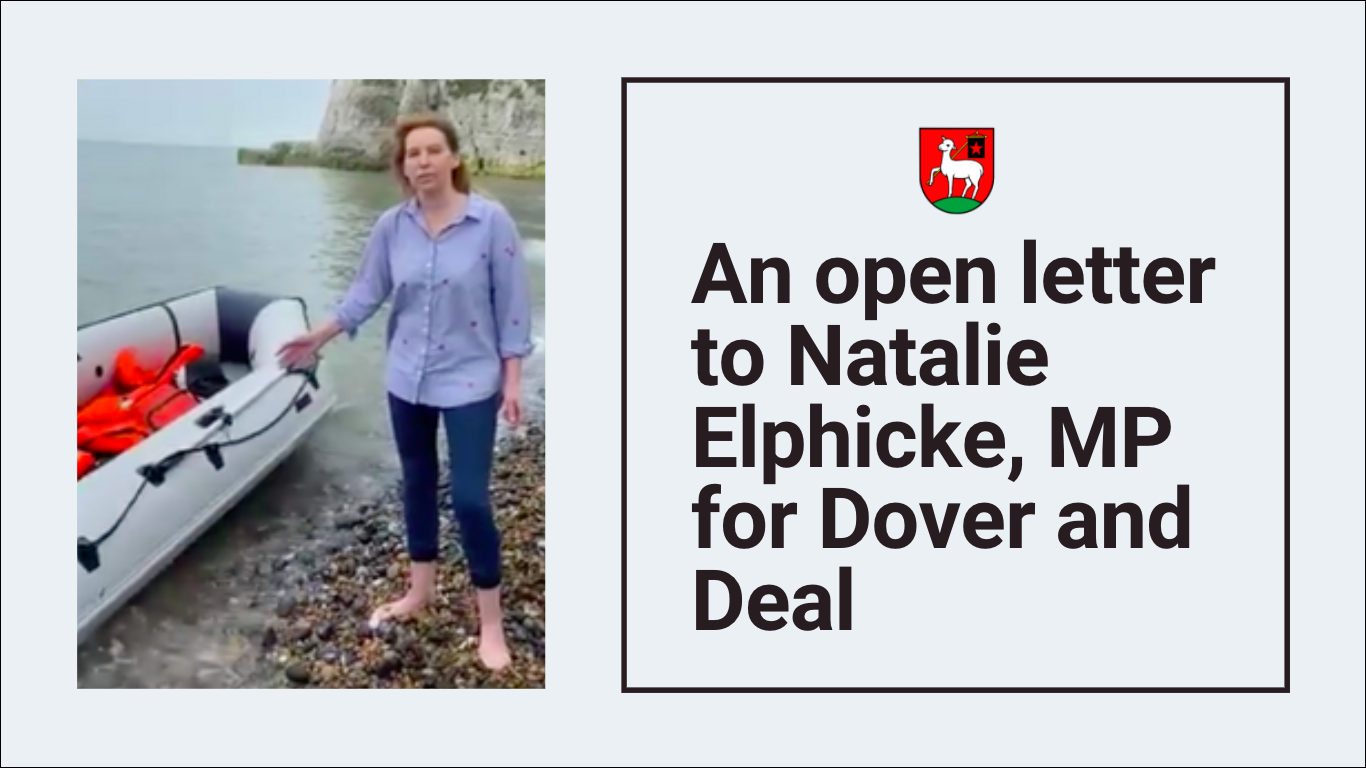 I was shocked and alarmed to see your recent tweets and accompanying video regarding “illegal entrants” at St. Margaret’s Bay yesterday.  I understand that this is a cause célèbre for you as MP of Dover and Deal, perhaps as a result of some voters in the constituency feeling that there may be higher numbers of people entering the country than there actually are.  Nevertheless, I would like to urge you to reconsider your current approach and trajectory on this issue.

As I am sure you are aware, the United Kingdom receives fewer asylum applications than many of its closest neighbours.  Germany, for example, received nearly five times as many asylum applications last year (161,900) as the UK (35,566), while France received more than three times as many (114,500).  Globally there is an even greater contrast.  Turkey currently hosts the most refugees (3,700,000), while Lebanon hosts approximately one refugee for every four Lebanese citizens.  In this context, we can see that asylum applications to the UK are actually fairly low, significantly so when compared to twenty or so years ago, but all the time the government chooses to close and restrict legitimate channels to seeking asylum, you can expect desperate people to try and make dangerous trips.

I want to draw your attention to Article 31 of the UN Refugee Convention which sets out the means by which a person seeking asylum may enter a country, including those means which, under normal circumstances, might be considered ‘illegal’.  This was given further definition by ‘R v. Uxbridge Magistrates Court and Another, Ex parte Adimi’ (1999), where Lord Justice Simon Brown ruled that “some element of choice is indeed open to refugees as to where they may properly claim asylum” and that “any merely short term stopover en route to such intended sanctuary cannot forfeit the protection of the Article[…] (even a substantial delay in an unsafe third country would be reasonable were the time spent trying to acquire the means of travelling on).”  As you can see, your characterisation of these people as “illegal entrants” does not necessarily correspond with the law.

Further to this, I would also like to address your use of inflammatory language throughout your video and in the text of your tweet as well.  Your identification of “seven fit men” is not only presumptuous (are you their GP?), but clearly used to portray these people as in some way undeserving and illegitimate because of their apparent fitness, as if fit people can’t be the victims of war, poverty or some other issue.  Compounding this with the words “run away into the village” is designed, whether you realise it or not, to create a picture of dangerous young men here to disrupt pastoral English life after “breaking into Britain”.  This latter statement is, in itself, an outrageously inflammatory accusation comparing desperate people to burglars – career criminals with their “high-end dinghy” and “top bike Honda motor engine”, as if they bought it themselves with their dirty money.

Words are powerful.  They can create and sustain ideas and opinions in people’s minds that have no factual basis and no basis in human empathy.  The words you chose to use throughout your video and tweet are alarming, coming as they do, from an elected member of parliament.  You may feel that you have, in some way, to compete with the likes of Nigel Farage – that perhaps he or some other reactionary political figure has a chance of taking your seat at the next election.  I do not know the likelihood of that happening, but I do know that the more you feed these prejudices, the more you try to sound like him, the more these prejudices grow in the wider population.  You have a voice – as the MP of the closest constituency to mainland Europe, an influential one.  Please consider the impact your voice has.  Please stop using it to demonise and stir up hatred against people whose stories you do not know.

Are you a person of faith?  I am so I hope you will humour me while I share some biblical reflections with you – the UK does, after all, claim to be a Christian country.  I have often said that although it is God-breathed, the Bible is written by the hands of people, and as such, is far from clear on most issues.  Migration and asylum are a notable exception.  The Bible is clear in this area.  Beginning in the Torah, we can see that the nation of Israel finds its identity in gaining freedom from oppression in a foreign land (Exodus 22:21; Leviticus 19:33-34; Deuteronomy 24:17-18).  With notable exceptions, we can see that the vast majority of discourse around ‘the foreigner’ in the Torah is positive.  They are equal to the native-born (Leviticus 19:33-34), observe the same laws (Exodus 12:49; Leviticus 24:22; Numbers 9:14) and are given fair trials just as a native-born citizen would be (Deuteronomy 1:16).

The refugee is similarly given precedence in the New testament, where we learn that Jesus was a refugee (Matthew 2:13-15). This prefigures the teaching and ministry of Jesus who says “you shall love the Lord your God with all your heart, and with all your soul, and with all your mind, and with all your strength.’[…] ‘You shall love your neighbour as yourself.’ There is no other commandment greater than these.” (Mark 12:30-31).  Similarly to the Hebrew Bible, where the foreigner and stranger are regularly listed alongside the widow and the orphan as representing the poor and oppressed, Jesus tells us that those who fed the hungry, gave the thirsty something to drink, and welcomed the stranger will inherit the kingdom, whereas those who did not are ‘accursed’ and ‘depart… into the eternal fire’ (Matthew 25:31-46).

I do not know if you are a Christian, Jew, Muslim, agnostic, atheist or what, but what I do know is this: God brings down the powerful and lifts up the lowly.  He fills the hungry with good things and sends the rich away empty (Luke 1:46–55).