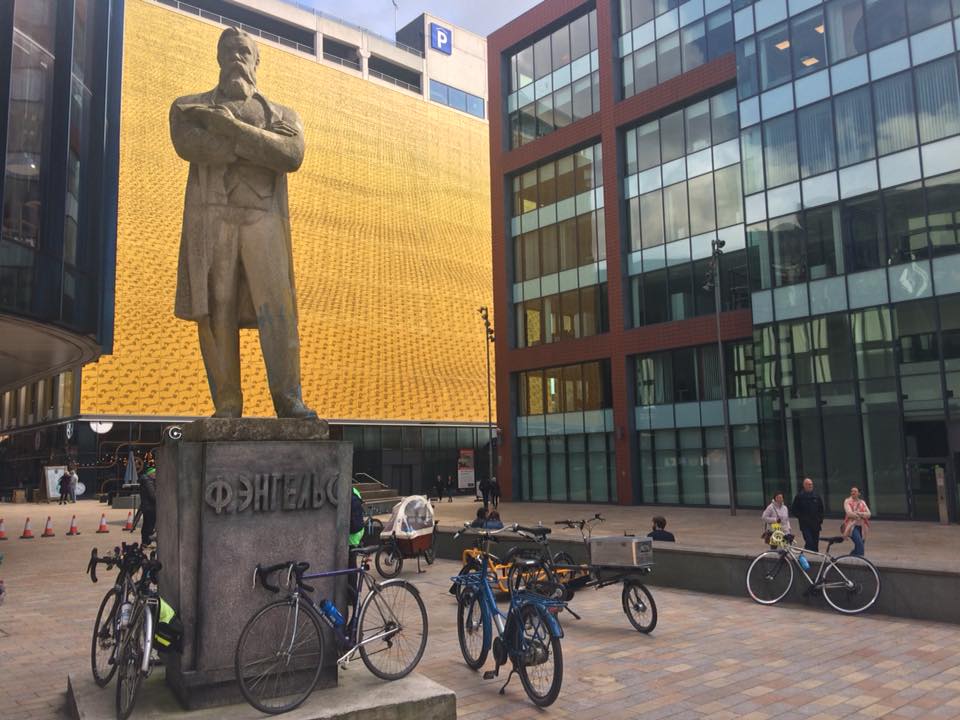 Being a writer of the more sporadic variety, it can often take something considerable to force me to get typing.  Sometimes however, a subject arises which probably doesn’t fall into that category, but simply requires a response.  Such is the case with Conservative MEP Daniel Hannan’s article about the artist Phil Collins’ recent unveiling of a statue of the German philosopher Friedrich Engels.  ‘We wouldn’t celebrate a statue of Hitler’, he says, ‘So why Engels?’.  There is, to put it bluntly, a lack of critical thought on display in this question alone, which is indicative of a wider trend amongst many when they hear of anything with any vague connection to left-wing politics.  Nevertheless it’s probably worth taking a look at this question to see if we can offer some kind of answer, or at the very least to try and understand the question and any issues around it.

The article begins with ‘a little trick’, setting the tone for the whole piece.  Retelling the unveiling of Engels’ statue as if it were Adolf Hitler’s form being immortalised in the centre of Manchester, Hannan makes the argument that Engels is in some way the Nazi leader’s ideological counterpart.  Unfortunately however, his attempt at answering the pre-empted objection that ‘Hitler was a criminal and a murderer, whereas Engels was a political theorist’, offers little critical response, and significantly downplays Hitler’s crimes.  The seriousness of this latter objection is exceeded in its enormity perhaps only by the third reason: this is quite obviously not the first objection one should raise to Hannan’s assessment of this matter.

Hannan can perhaps be forgiven for using the terms ‘Marxism’ and ‘Communism’ interchangeably, as if they were the same thing; after all, how many people really know the difference between the terms, or indeed if there is one?  However, his fundamental misunderstanding of this, and therefore misrepresentation of Engels, underpins his article’s logic.  Communism, we are told, ‘must be reckoned the most destructive ideology of all time’ because it has apparently killed 100 million people; more than any other ideology.   The problem of course is that the regimes to which Hannan is referring were not, and are not Communist.  Communism refers to an already established society which has no class structure, no state, and no unnecessary hierarchy.  Even the Communist Party of the USSR didn’t believe it had actually achieved communism.  A second problem with Hannan’s belief in the destructive power of Communism is the fact that Capitalism has killed far, far more than the 100 million he attributes to Communism.  Of course this is not something Capitalism is willing to acknowledge, spawning as it does, a destructive and self-perpetuating inability to be self-critical.

Capitalism’s lack of self-criticism is demonstrated by the fact that Hannan believes it is paradoxical for a communist like Marx to be financed by Engels, a businessman and factory owner, because to do so is surely hypocritical.  What this fails to consider though, and what Hannan and his right-wing comrades consistently refuse to acknowledge, is that when one lives within a capitalist system, one is forced to interact with it.  I am reminded of an episode of ‘Have I Got News for You’ in which then Conservative MP Louise Mensch, cannot see this simple point for the potency of the ideology to which she is so inexorably wedded.  Criticising Marx and Engels in this fashion when they had no control over the political and economic system into which they were born, is like criticising the caged tiger for pacing all day when it still eats its food.  For Hannan’s criticism of Marx, ‘a notorious cadger’ we are told, to carry any weight, it would have to be made within an already established communist society that did not require financial support for one to do the great work Marx did.  Of course at this point, it would cease to make any sense whatsoever.

The lack of intellectual integrity inherent in the implicit claim that Marxism is a single unified ideology, is rivalled by that inherent in the claim that Engels is in some way to blame for 100 million deaths in the same way Hitler is responsible for the deaths of 17 million.  The difference of course, is that murdering people on the basis of their race, faith, or disability, is not an inherent part of Communism.  In fact the reverse is true; Communism is fundamentally concerned with the equality of all people.  A quick visit to Highgate Cemetery, where a portion of the Communist Manifesto’s infamous final line proudly adorns Marx’s memorial stone, show us this.  “Workers of all lands, unite”, it reads, as relevant today as it was when Marx and Engels wrote it.  That contemporary relevance sits in stark contrast to any inability to understand why Marxism is ‘judged as a textbook theory, unrelated to its real-world outcomes’.  Instead we are told that ‘every Marxist regime ends up being homicidal’, conveniently disregarding the fact that Capitalism is guilty of exactly what its fiercest proselytizers again and again deflect onto Communism.

Marx and Engels’ relationship with violence is far more complicated than Hannan is willing to acknowledge.  The fundamental thing about it is their belief that Communism will not be established through democratic means.  Their reasoning for this comes down to their understanding that there are two classes; the proletariat and the bourgeoisie.  The bourgeoisie are by and large, born into a life of privilege and are therefore largely either incapable or unwilling to see things from the point of view of the proletariat class, even through well-reasoned argument.  Their contention is that the plight of the proletariat will become so untenable that reasoned debate will, and must, give way to violent revolutionary struggle in which the proletariat rise up against the bourgeoisie to take power from their oppressors.  All of which paints a very different picture of Marx and Engels’ understanding of violence than the ‘foundational ideology’ advanced by Hannan, and why we can say that Engels did indeed have ‘nothing to do with the abominations carried out in his name’.

Hannan’s parting shot is aimed firmly at the Labour Party leadership, notably connecting Jeremy Corbyn and John McDonnell with the violence apparently so inherent to Marxism, before dismissing them because they ‘still regard Marxism as a doctrine that is somehow theoretically correct, even though they cannot point to a single example of its actual success.’  Part of the issue of trying to point to examples of the success of Marxism is the difficulty in defining first what counts as Marxism, and second what counts as success, particularly for someone like myself, who doesn’t even consider themselves to be Marxist, let alone Labour.  Marxism, and Socialism more broadly, are old and varied ideologies, so it stands to reason there would be differing factions and ideas, just as there are in Capitalism.  It is true that no Marxist-Communist state has existed, but this is less a criticism of Marxism than it is an accusation against Capitalism.  The recurrent problem for broadly Marxist states is the opposition, interference, and outright war waged by Capitalist states such as the USA and the UK.  Even in light of this however, there are some obvious examples of what can be considered Marxism that have been successful.  Take for example the NHS and welfare state, most definitely products of Marxist thought, now considered so important by society that the neo-liberal project must dismantle them covertly, whilst pretending to love them.

One of the most striking things when reading Hannan’s article is the fact that it can be so hard to work out where there is simply a lack of understanding, and where there is a deliberate attempt to mislead.  This is something that has struck me when reading articles from some Conservative politicians and commentators before.  Perhaps our best chance of understanding it is by thinking back to Marx and Engels’ belief that the bourgeoisie cannot be convinced by reasoned debate due to their inherent desire to maintain their privileged position.  For those of us of a more pacifistic bent, that poses a problem.  I hope and pray it is not an insurmountable one.